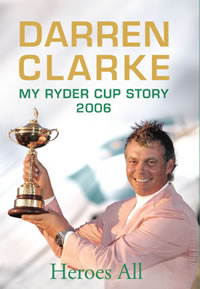 Productnummer: 1359
Productinformatie "Heroes All"
The Ryder Cup is one of the most thrilling spectacles in sport - an intensely dramatic contest founded on fierce rivalry, with a glorious history of nail-biting drama and truly unforgettable team performances. Won by a record-equalling margin, the 2006 Ryder Cup at Ireland's K Club was, for the European Team, one of the most glorious of all. A key member of the team both in 2006 and over the last decade, no-one knows the Ryder Cup better than Darren Clarke. In Heroes All, Darren delivers an enthralling, deeply personal account of how the Ryder Cup was won, affording the reader an unprecedented behind-the-scenes glimpse of the ultimate golf tournament.