The Greatest Game Ever Played (boek) 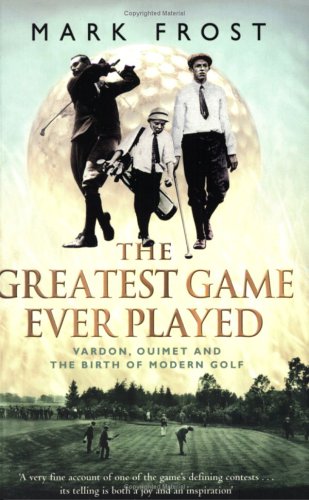 Productnummer: 1192
Productinformatie "The Greatest Game Ever Played (boek)"
Before 1913, golf had been a minority sport in the US. A British import, it was a game dominated by its creators, and none more so than Harry Vardon, multiple Open champion and 'King of Clubs'. Twenty-three years his junior, Francis Ouimet had developed a love for the game despite his father's fierce disapproval. His part in the 1913 US Open was meant to be as a spectator, but after a strong performance at the National Amateur Championships the powers that be insisted he compete. Amateur versus Professional. Novice versus master. Local boy versus all-conquering hero. Britain versus America. No one gave Ouimet a chance. But as the tournament went on, and his galleries got bigger, people began to think the unthinkable... "An extraordinary book... [with] passages that were so convincing they made the hairs on the back of my neck stand up" -The Times "Book of the year... a wonderful achievement... if you know someone who loves golf, good writing and a great story, please buy it for them. If you don't, treat yourself" -Scottish Golf "A thrilling, drawn-out contest... brilliantly told by Mark Frost. What makes this book special is the way it marries social history with sporting biography... Frost produces vivid, often moving portraits of the two protagonists" -Sunday Telegraph "A brilliant story, brilliantly told... a truly outstanding piece of sports writing" -Sunday Tribune "One of the best golf books ever written" -Travel and Leisure Golf